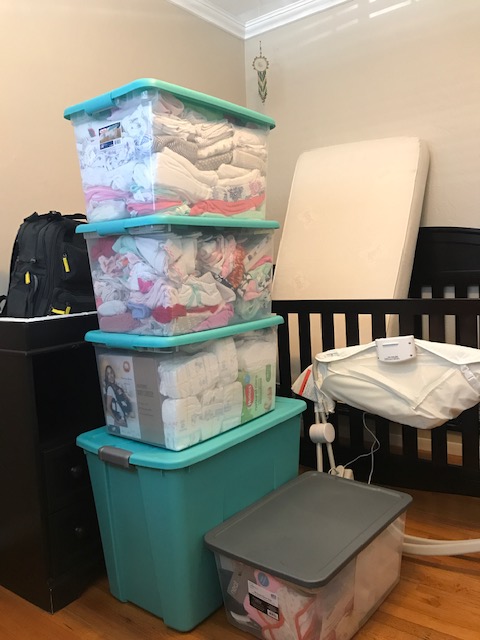 Diane –
Baby girl turned 8 weeks old today. It’s hard to believe that two months have passed since she was born. It’s been a long two months with a LOT of ups and downs. Last week I sent a letter to the birth mother so I could have some sort of closure. We haven’t heard from her since the hospital and don’t think we will, but I did leave the door open in my four-page letter. I haven’t really thought about how she’ll react, of if she’ll even open it. But I wanted to get it in the mail, and that’s done now. Check that off the list.

Brian and I are both super busy right now, making the final push these next few weeks with work/work/work/school until we get to spring break and can have a chance to catch our breath. Maybe we’ll even have a few partial days together to do something fun. Right now it’s a lot of “ships passing in the night” business. We’re getting through.

I dismantled most of the nursery today. Brian’s brother will be moving in with us for awhile so for the time being we are converting the “baby room” into a regular room, room. Dismantling the nursery was surprisingly quick, given how much stuff we had jammed in there. It’s weird, because I had spent so much time over the span of a few months setting everything up, and it came down so quickly. I only cried once! That’s progress, I think.

Right now we have a LOT of bins of “stuff” that I’m not ready to let go of, and hopefully will get to put to use eventually. BUT…we did make a major step today. Brian’s friend’s brother works with refugee families in San Diego and was looking for donations of diapers (among other things) for families with babies, so we made a donation of MOST of our diapers and wipes. It’s weird donating things that were given to us, but they were taking up a lot of space and we would rather they get put to good use. We figured our generous friends would understand.

For some reason I had about four friends call/text/message this weekend asking for updates. It’s always awesome to know that people are still thinking about us.

The update is really a non-update. Yes, we are back in “the pool.” But that doesn’t really mean much other than nothing or anything could happen at anytime. We don’t receive updates from our facilitator. At this point no one is calling to check in on us. The next time we get a call, it will be “the” call. Which could happen next week. Or next month. Or next year. Or in a few years. It’s hard when people ask for an update because I feel I always have to re-explain the process. If there IS an update, believe me, Brian and I will let everyone know. It isn’t like we are at a certain place on any sort of list. It all comes down to the birth mother (or, as I’ve learned in these last few days, the “expectant mother” – damn terminology updates are going to kill me), choosing us. The only thing that would change is if Brian and I decide to change course, which we aren’t considering at this point.

There are many reasons why we aren’t doing/considering other forms of adoption (adoption through an agency, international adoption, foster-adopt, etc.), at least at this point. A few of the reasons are: prevalence of adoption scams/unethical practices (so common, sadly), financial cost (maxed out right now), logistics, among others. I know that our friends and family want this to work out for us, and have ideas and reasons why they’d like us to know about/consider other forms of adoption. And perhaps we will in the future. But for now, we are doing what we are able to do, which is continuing to be patient and living life in the meantime. I love so much that we have SO many people who care and want this to work out for us. And obviously if someone we know knows someone who happens to be pregnant, live nearby, and is dying to place their child with us specifically, wants an open adoption (highly unlikely, but ya never know!), we are totally on board! Talk to your OBGYN. Talk to your hairdresser – you never know! But if this isn’t realistic or you aren’t local, it’s okay. Just checking in on us is PLENTY, and we truly appreciate it.

Brian–
I have been wanting to post a new blog for a while now, but haven’t been able to find anything in particular to focus on writing anything substantial about. So unfortunately, this post isn’t much of an update at all. It’s more or less a jumble of loosely connected thoughts and ramblings which reflect the jumbled distractions and challenges we’ve faced, and continue to work through, over these past few months. Like Diane mentioned, we’ve both been extremely busy. It’s been hard at times to breathe. Figuratively of course, for the most part. But there have been brief moments when some of the stress and anxiety of dealing with so many things at once seems to manifest themselves physically, like shouldering a crushing weight or fighting against a constricting, inescapable vice. Staying busy has actually helped me avoid extended moments of free time, when I might sink into the deeper layers of my thinking, beyond rational and practical self-reflection. I have always been able to present myself outwardly as strong and resilient, when dealing with painful situations or extremely difficult circumstances. Inwardly, I would be transitioning quickly from sadness and fear, to anger and a sense of hopelessness. Usually resulting in extreme self-destructive behavior. The birth of my son was the first major turning point, when I felt I had something or someone I NEEDED and wanted to be present in this life for. Finding Diane was the second. I have come a long way since then but to this day, I still have to fight against those familiar voices in my mind that call me to an “easier” way of dealing with things. I still fight against ill feelings that tug at my heart with false promises of being able to soothe the aches in my soul with poor decisions. Although not having Elise with us has been unbearable at times, the situation has reinforced how I can not let it overwhelm me. I have so much to live for. So much to love for. I am blessed beyond even my own understanding and, like my son and Diane, Elise has given me even more reason to be strong and grow stronger and not be broken by any obstacle thrown my way.
Well, I didn’t really intend for this post to become a self-reflection piece, but it is definitely therapeutic to some degree, not having to feel like I need to show the world my screwed-on smile and try to pass myself off as the most unaffected person in the world. It’s ok that I’m sad sometimes. It’s ok to feel lost sometimes. I feel overwhelmed currently. But I know I am loved always. I am blessed in this life always. There is hope and light always.
Hopefully the next post will be more focused and more related to Elise and the situation in general. I wish there was more we could actually present to everyone at this time, but like Diane said, we’re kinda in this limbo state of waiting for everything and nothing to happen. We’ll definitely keep everyone posted. Thanks again for the continued support, well-wishes, and kind words. If anyone has any particular questions or things you’d like us to speak on or address, please feel free to message us and we’d be happy to try to respond as best we can.

As a type of addendum to the post, I did manage to avoid addressing the fact that Diane mildly purged the nursery today. I wasn’t sure how I would feel. I definitely thought I would be less affected than I turned out being. It was emotional for many reasons. I didn’t want to change a thing because changing it meant I was giving up on the hope that she’d come back to us. I didn’t want to change or get rid of anything because it might mean I was letting go of her. I didn’t feel ready to fully exchange my heartache for hope quite yet. But it was actually a good 1st step. I haven’t lost any love for Elise. I haven’t lost any hope. I haven’t let her go. It’s a good reinforcer to the idea that life can and will move forward from this sad event in a positive way without losing or compromising those feelings and memories of the little time we had with her.

View all posts by Brian & Diane

1 thought on “A Non-Update, Update”

A Letter to Elise -The Cure